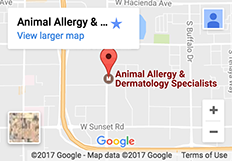 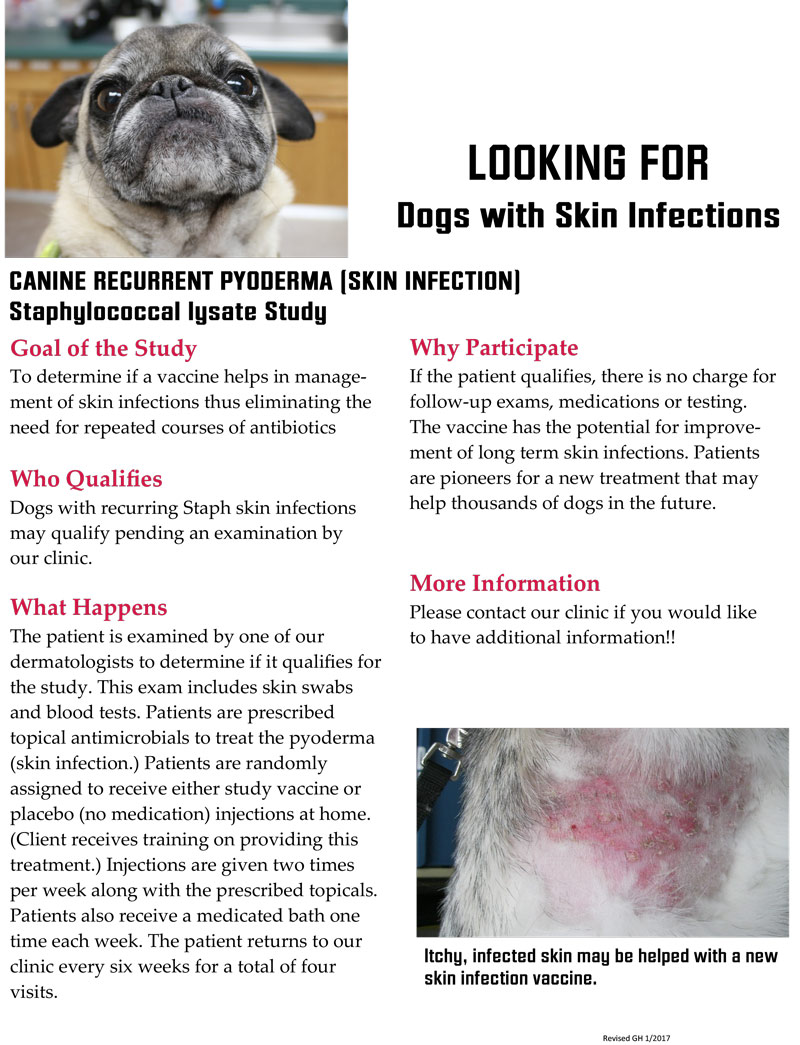 At the age of 2 Scotty started scratching at his ears, eyes and sides. Scotty had scratched and bit his sides so much that it resembled multiple bald spots. The patches of skin were bloody and red and eventually would start to scab. The scratching became so intense he would wake my husband and me up and scratch and bite himself for hours. I took him in to see his Veterinarian weekly. We tried changing his food, yeast medication, antibiotics, and antihistamines. I noticed he would start to scratch even more after my husband mowed the lawn and his eyes were watery and red. We started to think his allergies were more environmental. I had the grass replaced, rocks and a pool put in, carpets cleaned and even hired a maid to decrease the dust in the house. It did not help. All of this had occurred over a 5 month period. Scotty’s veterinarian recommended that I have Scotty see Dr. Trimmer.

Dr. Trimmer tested Scotty for allergies. He was allergic to human dander, trees, grass, cats, horses, ragweed etc. I almost started to cry because I was so happy someone finally knew what I was going through. We started him on allergy shots and Atopica. After a week I started to see improvement. He has now been on Atopica for approximately 7 months. Scotty does not scratching as much and his fur has grown back. I can even take him to the dog park again. Scotty is now 3 years old and does not scratch and bite his fur. His eyes and ears are not as irritated.

My husband, Scotty and me are very thankful to Dr. Trimmer and Ashley for all their help and patience. Scotty’s quality of life has improved immensely and we can’t thank them enough.

A couple of years ago my cat Lucky had an attack that caused him to cough, throw up and have very labored breathing. I was very scared and rushed him to the Vet, who told me he had asthma and gave him a steroid shot. He was fine for a few months and then had another attack and the Vet had to give him another steroid shot. The attacks became more frequent and the Vet told me the steroid shots could harm his organs if given too often. He recommended Animal Allergy Specialists. I took Lucky to see Dr. Trimmer and she tested for allergies. After the tests came back she provided me with the serum and syringes and showed me how to give Lucky a shot. He has been absolutely fine every since. Dr. Trimmer checks him out every 6 months .She is wonderful about contacting me right away when I have questions and concerns. I’m so glad we found Animal Allergy Specialists.
Lucky is precious to me and having him healthy and happy means the world to me.
Barbara Sands
Las Vegas, NV

When Augie was only six months old I noticed that he was always licking his paws, chewing on his legs and scratching his ears.  I took Augie to his vet who would give him a steroid shot.  The steroid shots stopped working and Augie started making sores on his paws and he got an ear infection that would not go away.  My vet recommended Dr. Trimmer and AADS.  Dr. Trimmer was able to diagnose Augie with a food allergy and use the video otoscope to look in his ear.  The video otoscope helped her flush his ear and the ear infection finally went away. Now Augie eats a special diet and he is no longer itching or has ear infections.  Dr. Trimmer was very caring and is great about listening to all of my questions.  Augie and I are very pleased to have found AADS and Dr. Trimmer.
Sasha Selfridge
Las Vegas, NV